The people of Guatemala finally get their way as President Otto Pérez Molina has now stepped down due to corruption and human rights violations.

Today, Guatemala does not have a president. President Otto Pérez Molina resigned overnight after authorities issued a warrant for his arrest. Pérez Molina is now in court facing charges that he led a massive customs fraud racket. He is prohibited from leaving the country, Attorney General Thelma Aldana told reporters.

“Pérez Molina remains president technically for now–a president in name only, with no effective power. But the Guatemalan Congress is expected to approve his formal removal. And if they do not, the judge overseeing Pérez Molina’s court hearing right now has the power to effectively strip him of his post.

His former Vice-President, Roxana Baldetti, is already in jail on related charges. Notably, she was taken to the “prison of the poor,” a shocking break from tradition in a country where a form of economic apartheid has long been the norm.

As I type this blog post, the former Army general who was a member of Guatemala’s CIA-backed G2 elite death squad is sitting in court, forced to listen to tapped audio recordings of his own phone conversations which the Ministerio Publico claims are proof he presided over a scheme of kickbacks and self-dealing known as #LaLinea. The corruption scandal set off a protest movement against government corruption which miraculously, unbelievably, led to the removal a sitting president in Guatemala by means other than a military coup.” said boingboing.net

Events are unfolding rapidly today, and what’s next is anyone’s guess. In Guatemala, nothing ever goes by the script. Below, a recap, but here is what I believe the U.S. government should do immediately to support this historic opening for positive change, in a country whose bloody history is partly our own doing:

1) “Freeze Otto Perez Molina’s U.S. assets. He stole untold millions from the Guatemalan people. If he’s hiding some if it here, it should be frozen.

2) Release the classified documents. CIA and NSA surely have documents or audio proving the role that he and his colleagues played in the mass murders over which he presided in the 1980s, and perhaps his many criminal dealings since.

3) Support Guatemala’s fragile democracy. Free and fair elections next, with whatever international support the people need to ensure that this “peaceful coup” does not serve to drag the country further into disarray.” said boingboing.net

In a letter to the president of Congress, Mr. Pérez Molina said that he was resigning to “face justice and resolve my personal situation.” Vice President Alejandro Maldonado is expected to become president for the remainder of Mr. Pérez Molina’s term, which ends in January.The resignation was viewed as a victory for the rule of law in a country with a long history of impunity for the business and political elite. Networks of corruption have gone unpunished as powerful groups succeeded in turning the law to their own advantage.

But in a series of swift-moving events since prosecutors first accused Mr. Pérez Molina two weeks ago of leading the customs fraud scheme, his allies in the cabinet and the powerful business confederation deserted him, and street protests mounted. Then, on Tuesday, Congress voted to strip him of immunity from prosecution.

Democracy Now has had some great coverage with Allan Nairn, longtime journalist covering Guatemala since the days when Otto Perez Molina was an Army general.

“Last night, the attorney general issued an order of arrest for General Pérez Molina, the president, and a few hours later, Pérez Molina resigned, just before midnight. It’s quite possible now that, as a private citizen, Pérez Molina will be arrested sometime after dawn. This is another huge victory for the popular uprising in Guatemala. Pérez Molina, just a few weeks ago, seemed completely invulnerable. But now he may be going to prison, and he will be facing trial on corruption charges.

But this is just the beginning of the challenges for the popular movement, because stepping in to replace Pérez Molina will be Vice President Maldonado Aguirre. Maldonado Aguirre is the key figure who, as a member of the High Court of Guatemala, annulled the genocide verdict against General Ríos Montt. He did that at the demand of CACIF, the oligarchs of Guatemala. After the criminal court issued a guilty genocide verdict against Ríos Montt and sentenced him to 80 years, the oligarchs went on TV, had a press conference, and they demanded—they demanded in the name of their money—that the court annul this verdict. And Maldonado Aguirre, who at that time was a leader of the high Constitutional Court of Guatemala, complied. And he is now the vice president. He is now the man who will be stepping in to replace Pérez Molina. And in fact, Maldonado Aguirre began his political career with the MLN, a political party. The MLN was a partner of the CIA in the 1954 invasion of Guatemala, which overthrew the democratically elected government, put the army in power and began the reign of terror that is still reverberating today. The MLN described itself as “the party of organized violence,” and they ran their own semi-public death squad. So now, this man, Maldonado Aguirre, is the acting president, and he will have that position until January.

This Sunday, there is a presidential election in Guatemala, and the slate of candidates is dominated by people who were backed by the old army generals who ran the massacres, drug-running syndicates, other organized crime and the CACIF oligarchs. Those being backed by those forces are the ones who are considered to have a chance to win, because they are the ones with the money. They’re the ones who have been dominating the media coverage and the advertising. And unless the election is postponed—and many, many people, including leading academics, leading lawyers and popular groups, have been calling for a postponement, so the electoral law can be rewritten to give a fair chance to actual real citizens, who are not backed by drug dealers or by killer generals, to get a chance to contest for office—but unless that election is postponed, one of those—one of the front people for those groups will be the newly elected president of Guatemala. So, if this movement is going to turn into one that wins real structural change, it’s only just beginning.

And even with Pérez Molina himself, there is a big issue. He’s now going to go to trial for corruption. But that’s really his minor crime. His main crime is mass murder. He was one of the implementers of the policy of slaughter in the Ixil highlands for which Ríos Montt was convicted of genocide. I met him at the time that he was doing this, and his soldiers described how they would go into villages and wipe out the civilians. But no charges have yet been brought against Pérez Molina for those crimes. However, they could be, because, under Guatemalan law, ordinary citizens can come forward and file criminal charges, as long as those charges are accepted by the Attorney General’s Office.

If there is going to be a serious legal process against Pérez Molina for the mass killings, it should include the—what in Guatemalan law is called the intellectual authors and the collaborators. And those would include the U.S. sponsors. Pérez Molina received backing from the U.S. military, and from U.S. intelligence when he later became head of G-2, the Guatemalan intelligence. So, if there’s a serious prosecution, it would have the option of calling U.S. officials, subpoenaing U.S. records and indicting U.S. officials for their role in the murders. And I would urge them to do that, because the law should be enforced impartially. And even though Pérez Molina was the man on the ground directing the killers, he had bosses and sponsors, and the Americans out of Washington were perhaps the most important.” 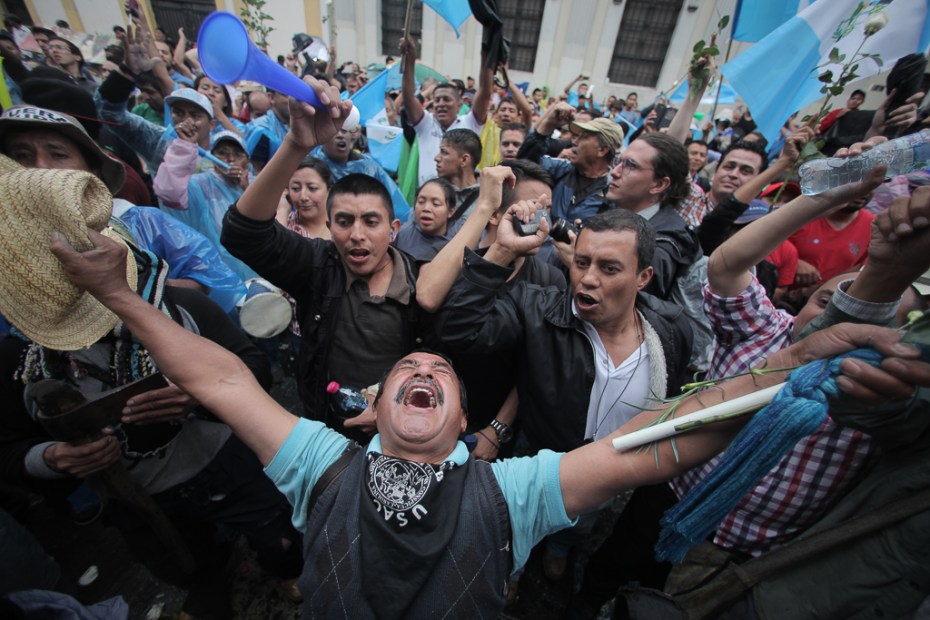